I never knew people performed INSIDE the subway trains for people before my relocation last week. There are a lot of talented musicians out there. I have encountered guitarists, acapella’s, drummers, wooden flute instruments, and even a saw-like thing played with a string from a violin. They all sound amazing and extremely cultural.

I mean, sure, you’re bound to have a lot of talented people for each profession in a city as concentrated and diverse as New York, but wow!

This is one thing that has really impressed me here. People are willing to try new ideas and to work in some form for money. People here are driven. I’ve encountered fewer panhandlers than individuals asking for money in more creative ways, such as performance and promotion. (And then you’ve got the crazy apocalyptic conspirators holding up big signs, who you can’t be quite sure what their overall goal is). Either way, everyone here seems to be here with a reason, purpose, and strong-willed mind. The city of opportunity. New York: where everything goes down. Where we come to make a living! 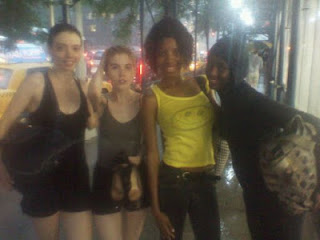 Most everyone here is very friendly and forthcoming. I’ve hung out with models attending the same open calls all this week, romped in the rain with them, and had really nice conversations with a lot of different people. There was an experience in particular, however, I’d love to bring to light. A perfect and satisfying example of entrepreneurship I love.

Let me tell you a story. I’m done with bullet points.

“I’m going to write a blog about you. I love…” I gave an encompassing wave to this man’s setup, “This. I love what you’re doing. You’re working. That’s creative.”

I was meeting someone that evening for a film festival and I was exploring Bryant Park. The parks here in New York City are very cute and (obviously) urban. This man I encountered is a writer by the name of Garrett Robinson. I personally am so used to seeing crazy people sitting around Seattle including panhandlers and the unmotivated, but this guy I could tell knows what’s up. He’s driven, like me.

Garrett had a little table set up with some books titled “Martha” (a poem) and another called “Zoë” with a nice cover. Garrett has published his books independently, self published, and his work has shown success. What pulled my attention to this guy sitting around wasn’t the book setup, it was the sign that said “Meet the Author.” A couple of thoughts flitted through my mind within a fraction of a moment. 1. Meet an author randomly in the middle of a park? 2. He’s trying to get noticed and 3. Self published. As you all should know already, I love to write. It is my second passion. And I have been familiarizing myself more with what “Self published” means.

Clearly, Garrett was self published and I admired that. Since I know a wonderful woman, author Deleyna Marr, with an indie self publishing company, Heart Ally Books, I thought, what the heck, I could be a good connection for this guy. The thing about networking on chance encounters, is you never know what kind of connections you are going to make, so don’t hesitate and always have cards on you!

He seemed like great guy to get to know, and I let Garrett Robinson read me some of his poem book to me, which was very fluent and structured. I told him what I do and that I am also a writer with a blog, as we exchanged cards.

Now you’re wondering why I am writing you guys a post on a self-published author I met in Manhattan. Networking and support, that’s why. I love that people here are not afraid to pursue things and go for it. That’s why I’m here in New York City. I’m literally living next to the cemetery Herman Melville, the author of Moby Dick, was buried. I am living practically down the street from where Edgar Allen Poe lived for 100 bucks a year.

You can be just as motivated. Find what you love and go for it. These are all extremely admirable traits and you won’t regret a thing if you’re ensuring your happiness.
Please take a look at author Garrett Robinsons blog and his books on sale at Amazon.com.

If you are in Seattle, stop and listen to that Real Change guy who sells newspapers. My mom volunteered with Real Change for a while and they all have very interesting stories. They are working for their living, too.

Why am I writing a blog post on entrepreneurship? Uh, motivation!

We use cookies on our website to give you the most relevant experience by remembering your preferences and repeat visits. By clicking “Accept”, you consent to the use of ALL the cookies.
.
Cookie SettingsAccept
Manage consent

This website uses cookies to improve your experience while you navigate through the website. Out of these, the cookies that are categorized as necessary are stored on your browser as they are essential for the working of basic functionalities of the website. We also use third-party cookies that help us analyze and understand how you use this website. These cookies will be stored in your browser only with your consent. You also have the option to opt-out of these cookies. But opting out of some of these cookies may affect your browsing experience.
Necessary Always Enabled
Necessary cookies are absolutely essential for the website to function properly. These cookies ensure basic functionalities and security features of the website, anonymously.
Functional
Functional cookies help to perform certain functionalities like sharing the content of the website on social media platforms, collect feedbacks, and other third-party features.
Performance
Performance cookies are used to understand and analyze the key performance indexes of the website which helps in delivering a better user experience for the visitors.
Analytics
Analytical cookies are used to understand how visitors interact with the website. These cookies help provide information on metrics the number of visitors, bounce rate, traffic source, etc.
Advertisement
Advertisement cookies are used to provide visitors with relevant ads and marketing campaigns. These cookies track visitors across websites and collect information to provide customized ads.
Others
Other uncategorized cookies are those that are being analyzed and have not been classified into a category as yet.
SAVE & ACCEPT