I know you all want updates, so here it is. I arrived at the airport at 8:23AM Eastern Time last July 12th. It took me hours to finally make it to the house I’m staying at. I’m renting a nice little room in Woodlawn, Bronx, NYC. Bronx–Yikes! Right? Not as bad as it might sound.

Woodlawn is a cute little community very north of Manhattan and I feel rather safe here. It’s like a little bubble in Bronx. Stepping outside the bubble is a little nerve-wracking though. 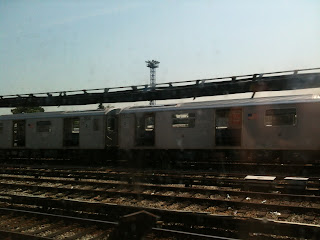 My first day here was an adventure: commuting the Subway system and learning the ins-and-outs. I purchased my unlimited monthly MetroCard to navigate as freely as I’d like, and my amazing friend who has been living in the city for almost a year now helped me make it “home.” She woke up early to meet me at the airport and gave me yellow roses. So sweet!

The first thing I did when I got here is open up the box I had shipped from WA with my sleeping bag in it. Something comfy. I considered the options I had for the rest of my day, got situated, and headed into Manhattan on the 4 train.

I expected long blocks filled with building after tall building. Crazy things to look at. More tall buildings (I made sure not to gawk; just took the occasional photo). Horses near Central Park like in the Madagascar movie. Diversity, diversity, diversity. I expected things to be different. And therefore, I was already adjusted to it. The best chameleons are adaptable! 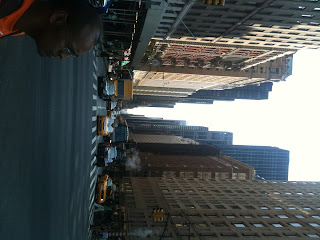 The only thing so far that really gets to me is the heat and humidity. You can’t escape it! Everyone is shiny with sweat. It doesn’t even cool down at night, which WA at least offers during the few hot summer days (technically, WA offers that every night). The only way to cool down is a cold shower when I wake up in the morning. Never thought a cold shower would feel so good. I’m rather excited to see how the winter turns out. I’ll take cold over this humidity any day.

I had trekked into the city on my first day and still hadn’t had much to eat so I found a Trader Jo’s and discovered their amazing quality of food (after eating it when I got back to my kitchen, that is). Food here is so much more expensive than the west coast though, so that will be my only escapade into Trader Jo’s for a while. Currently budgeting for $25-30 per week for groceries. My mom has been helping me determine the cheapest ways to eat. She wrote me an entire email dedicated to cooking a whole chicken, which I successfully accomplished today and made a soup for dinner.

I was totally exhausted by the end of my first day and conked out by 9PM. Though, I’m still totally on Pacific Time.

Yesterday (day 2) I had a few appointments that were quite successful, ate at Subway with a gift card, and went to Brooklyn for my first time. The location was a bit creepy and the fashion show I was participating in there went well after 1AM, so I ended up taking a cab. The designer I came to walk for was really helpful with tips and her boyfriend was also really nice. They are renting out a nice room in Brooklyn that I will be checking out on Friday. I need to be closer to the city! My commute is looong.

Finally, day 3, today. I got to relax and settle in a bit! I went for a walk to the local grocery store with my roommate to get my chicken, a few other items, and look at food prices. Of course, I had to call my mom at least 5 times asking what a good deal looked like. She’s probably feeling pretty useful. After the groceries, I got some hangers for my closet, had some pleasant conversations with the guys at the local delis, went for a 30 minute speed-walk, and did 100 situps. It is crunch time for New York Fashion Week and I’m ready to get back into shape.

I don’t feel like I’m so far away. I’m just a plane ride away from my old life in Washington. I’m not quite sure the permanence has sunken in quite yet.

Thank you to all who has been texting me and posting on my wall (“timeline”) and checking up on my progress. I’m not ignoring you (okay, well I kind of am), but I still love you! Things have been hectic with settling in. Keep checking up with me and sending your support because it means the world to me.

I do want to make sure I write my more informative blogs here soon. Someone has asked about how I was able to secure housing when moving to New York City so I did write a post to share with you all for that one. I still owe all of you guys parts 2 and 3 of my networking post, plus many more that I have yet to write.

Some interesting things that have happened….

Tomorrow I interview for a possible PT job at a Salon in Brooklyn. If all goes well, I’ll have a flexible source of income living in Brooklyn in a month (less commute), and I’ll be signed with a great agency. Next stop, Fashion Week!

We use cookies on our website to give you the most relevant experience by remembering your preferences and repeat visits. By clicking “Accept”, you consent to the use of ALL the cookies.
.
Cookie SettingsAccept
Manage consent

This website uses cookies to improve your experience while you navigate through the website. Out of these, the cookies that are categorized as necessary are stored on your browser as they are essential for the working of basic functionalities of the website. We also use third-party cookies that help us analyze and understand how you use this website. These cookies will be stored in your browser only with your consent. You also have the option to opt-out of these cookies. But opting out of some of these cookies may affect your browsing experience.
Necessary Always Enabled
Necessary cookies are absolutely essential for the website to function properly. These cookies ensure basic functionalities and security features of the website, anonymously.
Functional
Functional cookies help to perform certain functionalities like sharing the content of the website on social media platforms, collect feedbacks, and other third-party features.
Performance
Performance cookies are used to understand and analyze the key performance indexes of the website which helps in delivering a better user experience for the visitors.
Analytics
Analytical cookies are used to understand how visitors interact with the website. These cookies help provide information on metrics the number of visitors, bounce rate, traffic source, etc.
Advertisement
Advertisement cookies are used to provide visitors with relevant ads and marketing campaigns. These cookies track visitors across websites and collect information to provide customized ads.
Others
Other uncategorized cookies are those that are being analyzed and have not been classified into a category as yet.
SAVE & ACCEPT